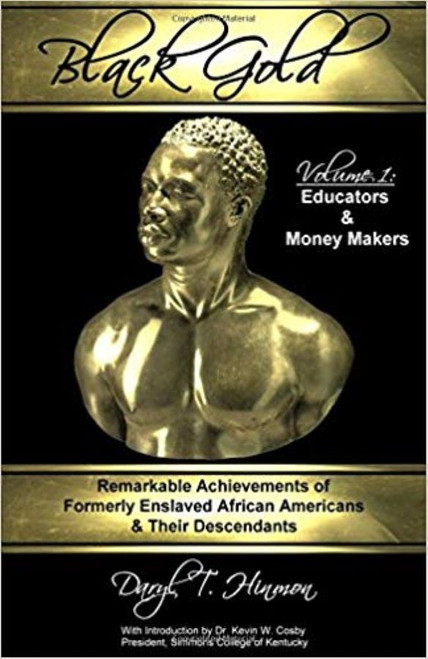 DISCOVER THE HIDDEN GEMS OF YOUR HISTORY!

Anything of value is typically hidden by nature, or other people, and it takes work to unearth valuable gems that will increase your worth. True Black History is one of those gems that was hidden from our enslaved ancestors because the true knowledge of their history would have made them 'forever unfit to be slaves'.

Black Gold contains meticulously documented, undeniable evidences of Black peoples' tenacity to succeed despite any obstacles. Give yourself the opportunity to be inspired by the real history of your exceptional ancestors and how they applied their brains, muscle and hustle to obtain their freedom and achieve their goals.

RECLAIM THE KNOWLEDGE THAT WAS BURIED BY YOUR ANCESTORS' OPPRESSORS!

The men who founded our country authorized the use of enslaved African labor to build the infrastructure and earn the wealth necessary to nurture a growing nation. Consequently, it was in early American's best interest to perpetuate African slavery in order to support the continued growth of the country. One method used to perpetuate the dreaded institution was to dehumanized the African image and manipulate society into believing they were doing Africans a favor by enslaving them. Anti-African propaganda, disguised as history, created the environment that allowed early Americans to enslave our ancestors without any moral consequence. Fast-forward 150 years, and that same anti-African propaganda creates the environment that allows modern day oppressors to unproportionately incarcerate Black men and women, to once again steal their time and strength to create wealth for others.

Now that slavery is over and done with, and America is one of the richest nations on the planet, information presented in Social Studies, American and World History classes should be cleansed to eliminate embedded African Dehumanization propaganda. False, negative and disparaging context about the history of Africans in Africa and Africans in America should be replaced with a true and full history of the African. African descendants deserve to be taught the richness of their history in the classroom especially since our blood, sweat and tears provided the nourishment that helped grow our country. But, until that happens, it is YOUR responsibility to negate and consistently battle African Dehumanization in the minds and hearts of yourselves, your children, and your people.

The purpose of this book is to provide intimately documented biographies of pre- and post-antebellum African 'prisoners of wealth' in order to rehumanize this historically significant group of men and women. You were taught specific details about a few of these historic individuals like Booker T. Washington, Phyllis Wheatley, Frederick Douglass and Harriet Tubman, but then were left to assume the remainder of their contemporaries were just nameless, docile, illiterate, so-called 'slaves' hunched over in the cotton field, carrying out 'massas' wishes. These Brothers and Sisters had names, dreams, aspirations, struggles and grand triumphs like Ms. Tubman, Mr. Washington, Mr. Douglass and Ms. Wheatley, but the people who developed the curriculum decided you shouldn't be taught about them or the African origin of civilization.

The biographies captured in this book are provided to document the lives, feelings, trials, tribulations and the ultimate successes of our African American ancestors so their modern descendants can be inspired by their true and full histories. This book aims to undo the devilish work of slave traders, greedy planters, politicians and businessmen who manipulated history in order to mentally and emotionally condition their African prisoners just so they didn't have to perform or pay proper wage for the labor necessary to build a nation.

Are they Rich because they're Smart? by Jack Barnes - Book

Black Matters: The Scientific Intervention in Our Affairs (Volume 1) - Book

We Ain't No Niggas! Exposing the Deception of YOUR World History Education-10th Anniversary Edition by N.Quamere Cincere - Book

Black God: An Introduction To The World's Religions And Their Black Gods- Dr. Supreme Understanding